The S&P 500 and Dow Jones Industrial average’s set new all-time highs in the holiday-shortened week.  Another tranche of stimulus passed by Congress and signed by the President catalyzed markets higher early in the week.  The House passed another version of the bill that would pay households $2000 rather than $600, but Senate majority leader Mitch McConnell squashed its hopes by saying there was no realistic path for approval through the Senate.  Direct stimulus checks should be hitting an individual’s accounts within the next few days.

The relief could not come soon enough as hospitalizations and deaths from the coronavirus hit new highs in the US. A faster-spreading variant of the virus was found in California, but scientists believe the new strain does not increase an individual’s mortality rate or sickness.  Inoculations continued to be administered but at a slower pace than had been expected.  Additionally, the UK approved Astra Zeneca/Oxford’s vaccine for emergency use. 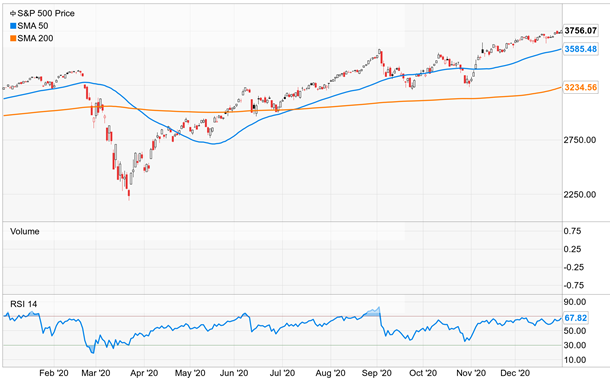 It was a light week for economic data.  Initial Jobless claims came in better than expected at 787k.  The figure was down 19k from the prior reading and better than the consensus estimate of 800k.  Continuing claims continued to fall, coming in at 5.219 million- the lowest level since March.

The information in this Market Commentary is for general informational and educational purposes only. Unless otherwise stated, all information and opinion contained in these materials were produced by Foundations Investment Advisers, LLC (“FIA”) and other publicly available sources believed to be accurate and reliable.  No representations are made by FIA or its affiliates as to the informational accuracy or completeness.  All information or ideas provided should be discussed in detail with an advisor, accountant or legal counsel prior to implementation. No party, including but not limited to, FIA and its affiliates, assumes liability for any loss or damage resulting from errors or omissions or reliance on or use of this material.

The views and opinions expressed are those of the authors do not necessarily reflect the official policy or position of FIA or its affiliates.  Information presented is believed to be current, but may change at any time and without notice.  It should not be viewed as personalized investment advice. All expressions of opinion reflect the judgment of the authors on the date of publication and may change in response to market conditions. Due to rapidly changing market conditions and the complexity of investment decisions, supplemental information and other sources may be required to make informed investment decisions based on your individual investment objectives and suitability specifications. You should consult with a professional advisor before implementing any strategies discussed. Content should not be viewed as an offer to buy or sell any of the securities mentioned or as legal or tax advice. You should always consult an attorney or tax professional regarding your specific legal or tax situation. Investment advisory services are offered through Foundations Investment Advisors, LLC, an SEC registered investment adviser.